Martin Parr (born 23 May 1952) is a British documentary photographer, photojournalist and photobook collector. He is known for his photographic projects that take a critical look at aspects of modern life, in particular provincial and suburban life in England. He is a member of Magnum Photos.

Born in Epsom, Surrey, Parr wanted to become a documentary photographer from the age of fourteen, and cites his grandfather, an amateur photographer, as an early influence. From 1970 to 1973, he studied photography at Manchester Polytechnic.
Parr began work as a professional photographer and has subsequently taught photography intermittently from the mid-1970s. He was first recognised for his black-and-white photography in the north of England, Bad Weather (1982) and A Fair Day (1984), but switched to colour photography in 1984. The resulting work, The Last Resort: Photographs of New Brighton, was published in 1986. Since 1994, Parr has been a member of Magnum Photos. He has had almost 50 books published, and featured in around 80 exhibitions worldwide.

Parr’s approach to documentary photography is intimate, anthropological and satirical. Macro lenses, ring flash, high-saturation colour film, and since it became an easier format to work in, digital photography, all allow him to put his subjects « under the microscope » in their own environment, giving them space to expose their lives and values in ways that often involve inadvertent humour. For example, to create his book Signs of the Times: A Portrait of the Nation’s Tastes (1992), Parr entered ordinary people’s homes and took pictures of the mundane aspects of his hosts’ lives, combining the images with quotes from his subjects to bring viewers uncomfortably close to them. The result of Parr’s technique has been said to leave viewers with ambiguous emotional reactions, unsure whether to laugh or cry. – SOURCE: Wikipedia – 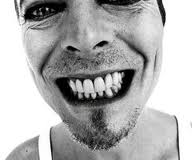 Waddell was born in Glasgow and brought up in St Albans, Hertfordshire. Whilst studying accounting at Brighton Polytechnic, he realised that his interests lay elsewhere and dropped out, taking up the study of photography at Barnfield College Luton and then London College of Printing. During this time, Rankin met Jefferson Hack, with whom he formed a working relationship. The two decided to start a magazine together called Dazed & Confused once they had graduated.

In 1999 Hack and Rankin founded Dazed Film & TV, a production company that would produce the first mast-head[clarification needed] television broadcast ever, the four hour special Renegade TV Gets Dazed, for Channel 4. In December 2000 Rankin launched his own quarterly fashion magazine, RANK. He also publishes Another Magazine, Another Man and more recently « HUNGER ».

Rankin began 2009 by inviting people across the UK to participate in his project Rankin Live!. A show of two halves, Rankin brought a museum scale retrospective of the last 22 years of Rankin’s photographic life, together with portraits of 1500 of today’s British public. Open to people over thirteen who had a distinctive style, sense of British eccentricity and enthusiasm. The participants were invited to the Rankin Live exhibition at the Truman Brewery in August to sit for their personal shoot. The portraits produced on the day were hung as part of the ever-changing exhibition and uploaded to the Rankin Live website. 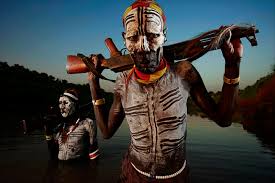 Brent Stirton is a Senior Photographer for Getty Images, based in New York. His award-winning work has been widely recognized for its powerful depiction of issues related to conflict, health and environmental issues. Stirton specializes in documentary work and is known for his alternative approaches to photojournalism, including lighting portraiture in the field, and his prolific work rate. He travels an average of nine months of the year, working exclusively on commissioned assignment. 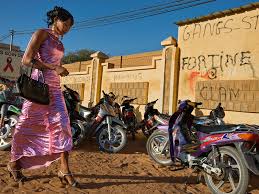 and post-conflict recovery, and women’s empowerment issues. Stirton works on a regular basis for the Global Business Coalition against AIDS and The Global Fund against AIDS, Tuberculosis and Malaria. He also works in the field for sustainability for The World Wide Fund for Nature, shooting global campaigns on the relationship between people and their environments. He also has worked for the Ford Foundation and the Clinton Foundation.

Stirton has won numerous awards and recognitions for his work, including five awards from the World Press Photo Foundation; in 2007 he was cited as a “Hero of Photography” in PopPhoto Magazine. Stirton holds a degree in Journalism from his native South Africa, where he began his career photographing apartheid issues. 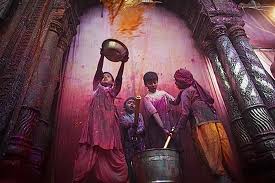 Daniel Berehulak (born 1975) is an award winning Australian photographer and photojournalist. Now based in New Delhi, he has recently specialized in reportages from India and Pakistan.

Born in Sydney, Australia, Berehulak studied history at the University of New South Wales. Initially he embarked on a business-oriented career but turned to photography in 2000, working for an Australian sports agency. In 2002, he started working for Getty Images in Sydney as a sports photographer, moving to London as a staff photographer in 2005 and now based in New Delhi. After covering Iraq and Chernobyl, he has recently been concerned with Pakistan, where he interviewed Benazir Bhutto shortly before her death, and India, including the elections. 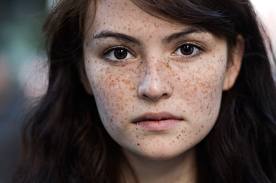 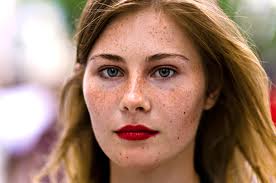 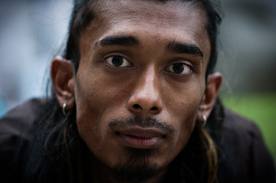 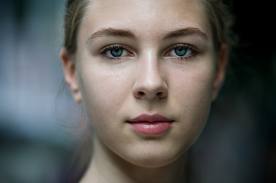 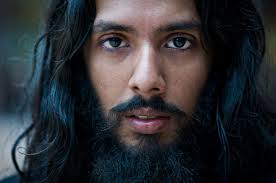 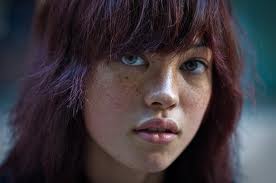 From his biography on his FB page:

My name is Danny Santos II and I’m a weekend photographer taking photos of strangers in Orchard Road since mid June 2008 (about the same time I moved from the Philippines to Singapore). This page is a collection of photographs I’ve taken in Orchard Road.

I’ve been trying to create an overall image of the beauty and energy of the Orchard Road through the different characters and scenarios found in this busy street of Singapore … and, more importantly, have fun in the process 🙂 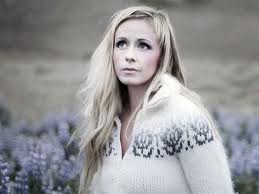 Rebekka Guðleifsdóttir (born May 25, 1978) is a photographer from Iceland who was named the « Web’s Top Photographer » by the Wall Street Journal on July 29, 2006.

She lived in Gainesville, Florida, U.S., from age 4 to age 11. She currently lives in Hafnarfjörður, near Reykjavík, Iceland. Her Flickr images led to her creating and appearing in a Toyota advertising campaign. (SOURCE: Wikipedia) 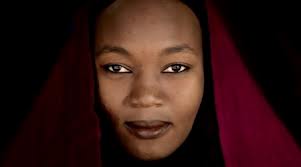 Eric is back from Omo Valley, Ethiopia. Ever since he was young, he has been fascinated by far away countries and travelling, and spent some time in Africa, unknowingly retracing Monfried and Joseph Kessel’s footsteps when he was 10 years old in Djibouti, Ethiopia and Yemen. 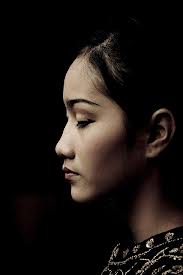 He started taking photographs in 2006. Quickly, magazines and newspapers from all over the world like Geo, Nat Geo, Lonely Planet Magazine, etc began using his work for illustrations on North Korea, Papua New Guinea, the tribes of Ethiopia, etc.

In 2008, his work on the people of Papua is displayed at the prestigious VISA photojournalism festival in Perpignan.

Eric Lafforgue spends most of his time travelling the globe to share his encounters, through the perception of an ethnologist and the heart of an artist, privileging the regions or populations in danger and less usually visited countries.
He is part of the european leading agency Rapho. (SOURCE: His Website) 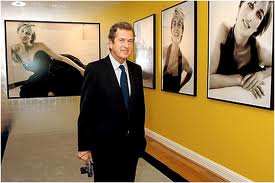 Mario Testino (was born on October 30, 1954) is a Peruvian fashion photographer. His work has been featured in magazines such as Vogue and Vanity Fair. His career highpoint came when he was chosen by Diana, Princess of Wales, for her Vanity Fair photoshoot in 1997. Testino has been regularly employed by the British royal family ever since.

Aaron Hicklin of The Observer described him as « the world’s most prolific magazine and fashion trade photographer ». His persistence in shooting Gisele Bündchen is widely credited with elevating her to supermodel status. 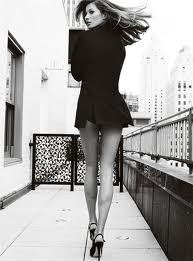 In 1976 he went to London to study photography. Living in an unconverted floor of a hospital, without much money, he funded himself by working as a waiter. He had his hair dyed pink which helped him get noticed as a photographer.

He is one of six children born to an Italian father and an Irish mother. He attended the Catholic school Santa Maria Marianistas. Testino attended the Universidad del Pacifico, the Pontificia Universidad Catolica del Peru and the University of San Diego. In 1982 Testino moved permanently to London.[citation needed]

Testino has shot fashion stories for Vogue, V, Gucci, and Vanity Fair. Celebrity subjects have most famously included Diana, Princess of Wales and her sons. Also more recently Prince William and Catherine Middleton on the occasion of their engagement in December 2010. Other subjects have included many actresses such as Kim Basinger, Kristen Stewart, Cameron Diaz, Gwyneth Paltrow, Julia Roberts, Meg Ryan, and Catherine Zeta-Jones, models such as Claudia Schiffer, Gisele Bündchen, Elizabeth Hurley, and Kate Moss, performers such as Janet Jackson, Madonna, Kylie Minogue, Britney Spears, and Lady Gaga, and public figures like Baroness Thatcher. Living in London, he continues to photograph the British Royal Family as well as shooting campaigns for Burberry, Gucci, Michael Kors, Dolce & Gabbana, Estée Lauder, Valentino and Versace. He and fashion stylist Carine Roitfeld, the former editor of French Vogue, are credited for drawing significant attention to the house of Gucci through provocative ad campaigns in the mid-1990s, which, along with Tom Ford’s designs, eventually led to the revival of Gucci as a major fashion house.

Testino has become one of the world’s most well known and celebrated fashion photographers. His work has been featured across the globe in magazines such as Vogue, Vanity Fair and V, and he has crafted and contributed to the imagery of leading fashion houses such as Burberry, Gucci, Versace, Calvin Klein, Dolce & Gabbana, Salvatore Ferragamo, Estee Lauder and Michael Kors, among others. As well as having published seven books of his work and edited one other dedicated to contemporary art and artists from his native Peru, Mario Testino has had many successful exhibitions in galleries and museums around the world.

In 2002, The National Portrait Gallery in London staged the landmark exhibition “Portraits” by Mario Testino that to date remains its second most successful exhibit. For ten years it had the highest attendance of any exhibition ever to be held there. Over the next four years the exhibition went on tour to Milan, Amsterdam, Edinburgh, Tokyo, Mexico City, and Boston.

Testino has also received royal commissions, including The Prince of Wales, The Duchess of Cornwall, Prince William, Prince Harry, The Duchess of Cambridge, Diana Princess of Wales, The Duke of Kent, Prince and Princess Michael of Kent, Prince Nikolaos of Greece, Prince Willem-Alexander and Maxima of the Netherlands, Prince Haakon Magnus and Princess Mette-Marit of Norway and Her Majesty Queen Rania al Abdullah of Jordan.

Following several years working as a photographer’s assistant in London Lorenzo Agius went freelance in 1989. Specialising in advertising, portraits and still life his big break came when he shot the publicity posters for the film Trainspotting in 1996. 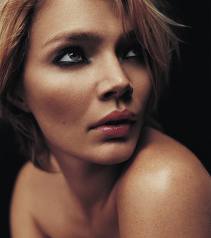 Shortly after that he secured a cover shoot for Vanity Fair’s ‘Cool Britannia’ issue and shot the stills for the Spice Girls movie. He now has a reputation as one of the world’s leading portrait photographers shooting celebrities including Madonna, Muhammad Ali, Johnny Depp and Kevin Spacey.

Lorenzo has a variety of magazine, film, and big-ticket advertising clients on both sides of the Atlantic and in 2006 his retrospective exhibition ‘Look At Me’ was showcased at the Getty Images Gallery in London.

From May to July 2010 several of Lorenzo’s best known portraits of movie stars, including Ewan McGregor and Kevin Spacey, were displayed on large banners as part of the 63rd Cannes Film Festival. So far in 2012 Lorenzo has been photographing a number of campaigns and fashion shoots, including portrait work for HBO on the TV series ‘Nemesis’ and a fashion feature for Vanity Fair magazine. (SOURCE: Canon Professionnal Network) 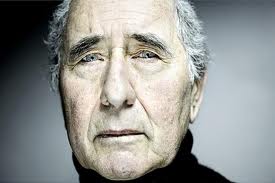 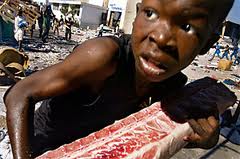 Shaul Schwarz was born in Israel in 1974. He started his photographic career in the Israeli Air Force. After finishing his service he moved on to cover news in Israel and in the West Bank before relocating to New York in 1999. 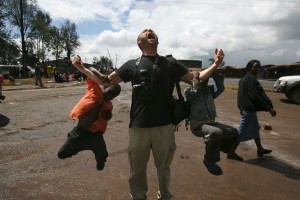 Today he works as a freelance photographer represented by Reportage by Getty Images. Schwarz’s work has appeared in major international publications such as Newsweek, Time, the New York Times Magazine, GEO, Paris Match, Stern, El País Magazine, GQ, and Marie Claire among others. His coverage of the conflict in Haiti in 2004 received two World Press Awards. In 2005, Schwarz won the highly acclaimed Visa D’or in Perpignan for his work on settlers from the Gaza strip. Most recently he was honored with the 2008 Robert Capa Award given out by the Overseas Press Club.. (SOURCE: National Geographic)